“Fashion!” Ah, that reminds me of when I worked at a certain over-priced clothing retailer and I hated it…the only joy and relief I would feel was when this song had its’ turn in their set store playlist. Oh David Bowie, you beautiful star in the sky.

Anyway, back to talking about fashion…lately I have the Clone Wars series playing in the background as I blog or do other tasks. Yes, I’ve already seen the entire series, but it’s fun watchin episodes again and making new observations. Like, in the Clone Troopers’ living quarters, I spotted a pin-up-ish poster of the background of a lady dressed like Padme’s handmaidens were dressed at one point in The Phantom Menace. I like that reference, and I also enjoy knowing the clones had such posters they were fond of. Then, I spotted an actual pin-up poster in the background of a bar-like place of a sexy, scantily clad Twilek. On the other side of this was another pin-up, but it was of a Hutt lady…that one was not quite nearly as sexy as the other one. 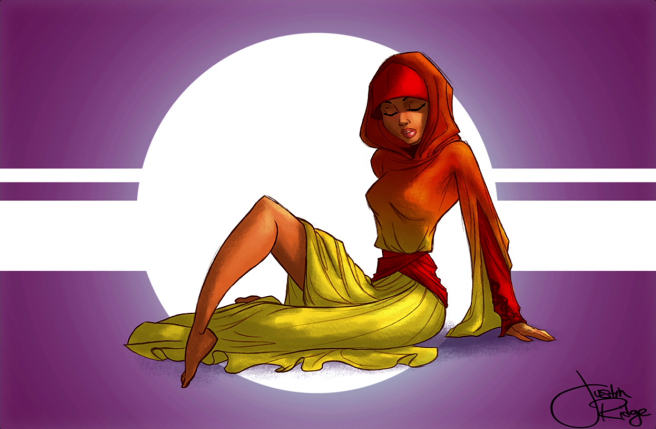 I can only find the poster that was in the Clone Troopers’ living quarters…I love this outfit. I want to Cosplay someday. But I imagine that would require some crafty skills and/or punching the crap out of my bank account.

Aside from background finds, I still love seeing Clone Wars-exclusive characters. Not just my Ahsoka Tano, but I also love seeing Duchess Satine of Mandalore…the woman who had Obi Wan Kenobi’s heart but it was never to be. Kenobi had told her that had she given him the word, he would left the Jedi Order to be with her. I think it was pretty obvious that Satine loved him, but men…even Jedi men…sometimes don’t get the simplest romantic cues. Satine is a strong, independent, surprisingly fierce pacifist and I love her character. And, in the tradition of elaborate royalty fashion in the Star Wars universe, Satine has plenty of unique and fancy outfits that nearly rival Padme’s…just look at this gem here: 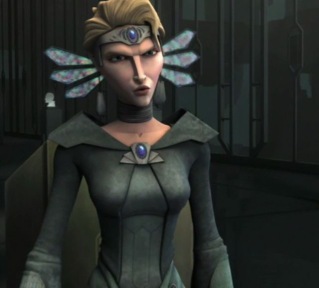 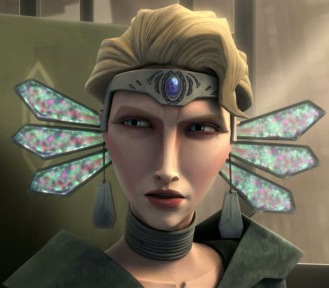 And this wasn’t even a special event, she literally just wore this to confront the Prime Minister about toxins in the schoolchildren’s beverage containers. Look at her face. She’s pissed about the little children that are ill because of black market nonsense. And she’s not backing down; she’s going to rock the crap out of that gem-headband and let her sparkly headwings (I’m not sure how they were on her head…) demand the answers!!

Seriously, though…why can’t we get away such Star Wars fashions in real life?! Not this wingpiece in particular, but several other outfits and accessories make me wish we lived in the Star Wars universe. Actually, it’s not just the clothing…everything is just so much cooler. But let’s just have fun thinking about the fashion, and wanting to dress like Padme every day. Sure, these two are royalty/political figures, but still. I’m sure I would still dress like them if I was merely an ordinary citizen. As I mentioned earlier, I love that robed dress that is meant for a handmaiden…handmaiden to the Queen isn’t quite “ordinary citizen”, but it’s somewhat close.

Hold up, I need a bigger image of my favorite:

Don’t think that Padme didn’t pass down her fabulous fashion sense genes down to her daughter, Princess Leia:

Rey, at the end of The Force Awakens. Yes, not every outfit has to be ridiculously fancy for me to love it!

4 thoughts on ““We are the Goon Squad and we’re coming to town, beep beep!””