Either if you know me or if you’ve been reading my posts, you can probably gather that I don’t listen to a lot of modern music. Part of this is because I already have such a glorious music collection from the 1950’s to the 1990’s that there is little I need to add. But that doesn’t mean I don’t like any modern music at all, I just don’t know as much because I don’t listen to those radio stations. I only get new music from new movies, sometimes work, a suggestion from friends or family- that’s pretty much it. I still love finding new music, but honestly what’s more thrilling for me at times is when I discover something previously unknown to me by somebody I already admire.

Almost a few years ago now, I was really quite depressed. One of the things that helped me get through it (aside from therapy and whatnot) was the Who. I remember one night I was at Barnes and Noble and I found Pete Townshend’s autobiography, Who I Am, and I decided the read the first few pages. In doing so, I was helplessly drawn to it and I knew I needed it. I immediately bought it and was immediately hooked. The first night I had it home, I was up until about 3am because I simply couldn’t stop reading it. I fell in love with Pete. I honestly feel like that was healthy for me at the time, as silly as that sounds. But anyway, he talked a lot about the albums, the process of making them and writing the songs for them. I felt like I was missing something, not actually knowing the albums he was talking about, so I ordered three of them to start with online, listened to them all in one night, and was in love with all of them. Right now, I’m just going to focus on one of them, my favorite of the trio I had ordered: The Who Sell Out. 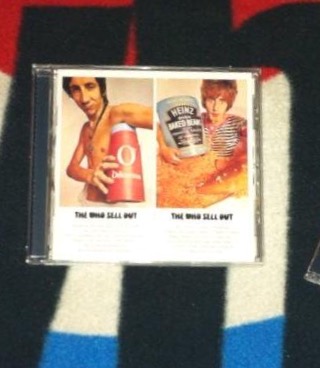 Yes, Pete is holding a giant stick of deodorant, Roger is in a tub of baked beans, and on the back you’ll find Keith with an acne cream (also giant), and John in a leopard Flinstones/Tarzan-ish dress thing, advertising the power of his muscles.

It’s a commercial themed album and it’s amazing, clever, and hilarious at times. At the very beginning and in between some songs, you’ll hear brief commercial-like jingles and women singing announcements as if you’re listening to a radio station live every time you listen to the album. I love it so much; I love listening to this CD in my car because I feel like it’s my own private little Who radio station and I’m back in time in the 60’s.

But they don’t stop at the little things, like singing about Coca-Cola and cars in between full tracks. Many of the full songs themselves are an advertisement; Pete sings a lovely little song called Odorono but it’s only at the end you realize it’s about deodorant.

I love every single song on here, but here are my highlights:

Here are all the times (at least that I can think of right this second) where Pete Townshend uses the word “glittering“:
-Obviously in Odorono: “She ripped her glittering gown, couldn’t face another show, no; her deodorant had let her down; she should have used Odorono”
-In Tommy, in The Amazing Journey, Pete describes a tall stranger “dressed in a silver-sparked glittering gown, his golden beard flows nearly down to the ground”
-In Quadrophenia, in 5:15 (probably my favorite song from that album) Pete writes “He man drag in the glittering ballroom, greyly outrageous in my high heeled shoes”
-Later on The Who Sell Out, there is a song simply called “Glittering Girl”
Okay…I can’t actually think of any more….I swear there’s at least like one more….oh well. I just like that Pete likes that word. And yes, I say Pete; he was and is the brainchild, the main lyricist, the creative one.
That isn’t to discredit the other members, though. Because they were all amazing. They all sing songs on this album…actually, Keith might be the only one who doesn’t sing alone on this album, but he certainly did on other albums. Besides, he was the best drummer this world has ever known. It doesn’t matter how much he sang solo.
Oh my goodness, I digress….back to some of my favorite songs from the album!!
I didn’t even mention the only song that most people (not super Who fans) would know from this album, the only hit single: I Can See For Miles. That song is of course just wonderful. Even Pete Townshend himself thinks it should have been number one on all of the charts and it’s the best thing he had written in that point in their career. I learned this from watching Tommy: The Amazing Journey, which is a movie about the making of that iconic album. I just wanted to tell you about the songs you definitely wouldn’t know but should most certainly check out.
Also, as I mentioned earlier, this was when I was madly in love with Pete Townshend (I still am in a much subtler way, of course). One of the things in his autobiography that made me want to know this album was him talking about how awkward the photoshoot for it was for him. He was a tall, lanky, skinny lad, and he didn’t feel sexy at all. But I think he looked absolutely adorable. This was the background on my phone for quite some time:

2 thoughts on “Flashback Friday Album Spotlight: The Who Sell Out”