“With every paper I delivered.

Bad news on the doorstep, I couldn’t take one more step.

I can’t remember if I cried when I read about his widowed bride.

But something touched me deep inside, the day the music died.”

I must have heard this song about million times now, but every time I hear it, it makes me cry. If you didn’t already know, it’s American Pie by Don McLean. He declares that 57 years ago today was “the day the music died”, but in my heart and to so many other fans, that music is never dead. Buddy Holly already had a few successful years in establishing rock and roll when he took his last steps onto that doomed plane in 1959. He was only 22 when the plane crashed (which was due to a massive mistake of the pilot but I’ll be nice and say nothing else). Ritchie Valens, a talented singing and guitar playing American teen of Mexican heritage (like me!) had perhaps less than a year of rock and roll fame when he had passed. He was only 17. J.P. Richardson, famously known as The Big Bopper, was the third musician on that plane, and he was 29. Like Valens, his music career was still extremely fresh; he was previously a radio DJ personality but only recently released his own novelty hit, “Chantilly Lace”.

I have been raised knowing all about this day. My dad is a huge Buddy Holly fan, so naturally I grew up listening to a lot of Buddy Holly and the Crickets. “True Love Ways” was the first song my parents danced to as husband and wife at their wedding. After that, of course, they danced to “We Belong Together”, which is originally by Ritchie Valens, but I remember them saying that for some reason it had to be the Los Lobos version…which is decent, I guess. It’s the version from the La Bamba soundtrack, a movie about Ritchie Valens’ short rock and roll career. But at my own wedding, I’m definitely having the original version play. I didn’t know as much about Ritchie Valens as I did about Buddy Holly until I was 13 or so. I felt more connected to Ritchie Valens than Buddy Holly because he was a young American of Mexican heritage, like me, and also didn’t know Spanish, like me. But he can sure sound like he does; in “La Bamba”, he sounds so beautiful and you don’t doubt the authenticity. Like I said before, the poor dear was only 17! His career was just starting! And he was already so successful. I have no doubt that he and Buddy Holly would have continued to bring us fantastic rock and roll songs had they not been persuaded by the February cold on a cheap and lousy bus to ride on a plane to continue performing in “The Winter Dance Party” tour.

One of the reasons that Don McLean saying he may have cried reading “about his widowed bride” is referencing that Buddy Holly’s wife, Maria Elena, had just found out she was pregnant but then suffered a miscarriage. And again, that makes me cry. But, here’s why I don’t necessarily think “the music died”; they live on, and they always will. Not only in the music they have made, but also in the artists that they have influenced as well. For example, you wouldn’t have the Beatles without Buddy Holly and the Crickets (Beetles+Crickets=Beatles). Or the Hollies, who straight up named themselves after Buddy Holly; they’re another beautiful sixties band. The Rolling Stones loved Buddy Holly as well and have one of the few covers of a Buddy Holly song that I accept; “Not Fade Away”. Ritchie Valens influenced so many amazing artists, like Jimmy Page of Led Zeppelin, who is arguably one of the greatest guitar players of all time, and then fellow Latino artists, like Carlos Santana. Actually, all Latino artists of today can thank Ritchie Valens for paving the way. Granted, his white management insisted he go by Valens instead of his actual last name, Valenzuela, but sadly this was the 1950’s; it’s hard to say if he would have been given the same chances had his name been shortened to sound more white and less Latino.

I could go on and on about how amazing Buddy Holly and Ritchie Valens were, but their music speaks for itself. Here are a few of my favorites of theirs:

And of course, both of their lives have been immortalized in film…but to be honest, I’m waiting for new films. I haven’t seen The Buddy Holly Story in a while, but I just can’t get over the casting of Gary Busey. There just has to be somebody better out there. Also, evidently the racist comments the Crickets band members make about Maria Elena, who is of Puerto Rican descent, allegedly did not happen. They could also simply be trying to save their reputation, but I want to believe they weren’t racist. And La Bamba…it’s good, but I hate that they made Ritchie Valens obsessively afraid of flying. I’ve read that his mother said he was not, not any more afraid of other Americans who had not flown yet, seeing as how it was still a newer thing back then. Isn’t the abrupt and super early end of a rock and roller sad enough without trying to add more drama to it? Oh well. I’m waiting for the remakes. As of right now, the Big Bopper has not had any films solely about him, though he is of course featured in the other two. I know his son has been trying to make something happen for him, but it just hasn’t happened yet.

Guys, look at the Big Bopper’s leopard print jacket. I freaking love it.

Look at this goofy guy. 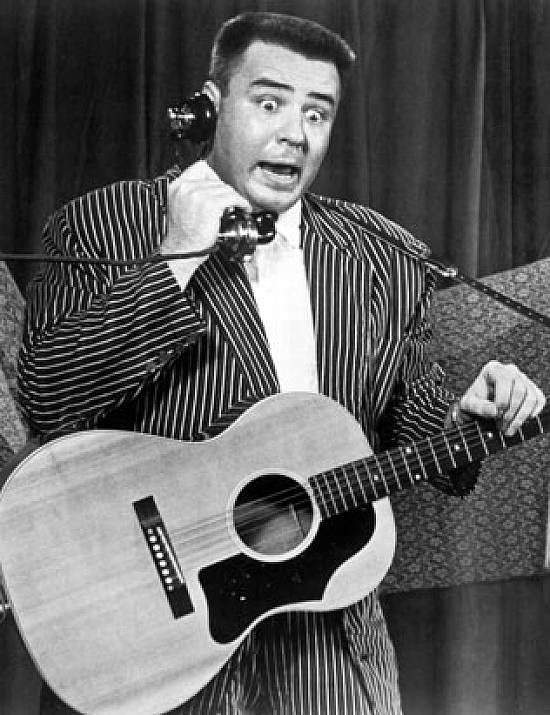 And then…my favorites. My darlings. 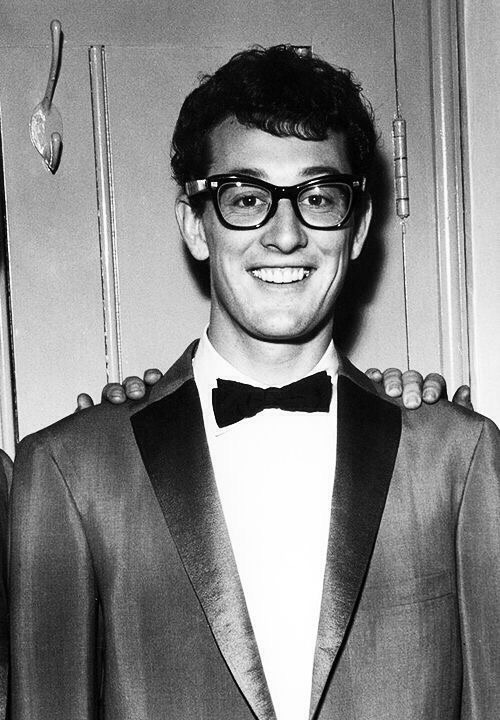 Buddy Holly…so adorable and sweet. And with his classic glasses. 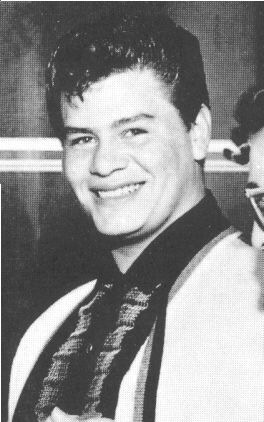 And of course, my fellow Mexican-American, my Ritchie Valens.

And I still can’t! Here’s another to keep you dancing!!

One thought on ““But February Made Me Shiver,””