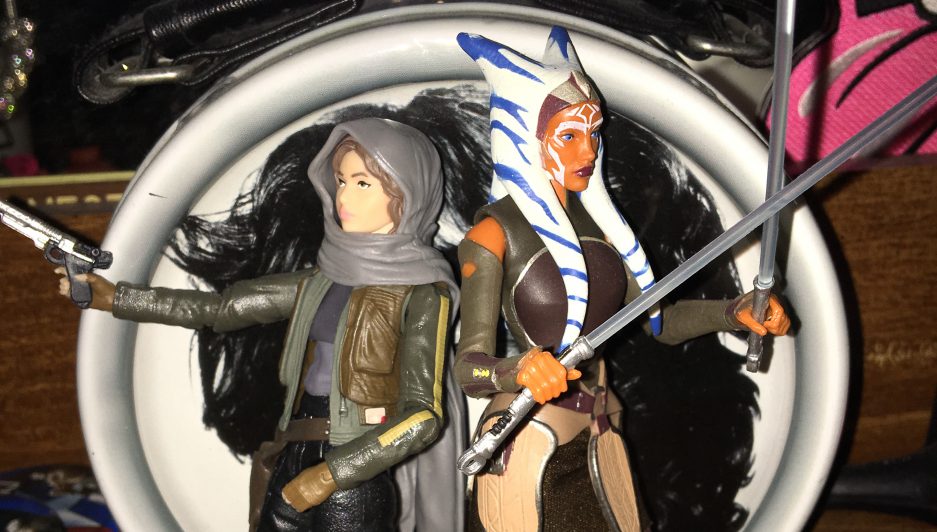 Actually, familiarity is the most comforting to me right now. While November/December is a time I try to not spend so much on myself, I decided that I needed to get my geek on and go to another comic convention. This one wasn’t a big one in the city, though; it was Mighty Con, which was less than a half hour away  from me. Cheap admission, and I already had a few Cosplays ready to go, it was a no brainer. Can you guess who I was?!

Alright, I’ll tell you! I was Ahsoka Tano, one of my beloved Star Wars heroes/favorite characters. I already had everything I needed for this costume from a convention I went to last March. In fact, that’s how I justified that investment at the time: “Oh, I’ll wear this a bunch of times to other conventions,”. That is also how I want to justify my dream purchase of a latex headpiece of Ahsoka’s lovely Torgruta lekku and montrals on Etsy, but I won’t let myself buy it just yet; the good ones are all over $100. But like, I could honestly dress up as Ahsoka a few times a year for the rest of my life, having discovered the joy of Cosplay at these lovely nerd conventions. So eventually, I do plan on getting one of those expensive headpieces…or two; her lekku is longer in her Rebels look, which I would also love to do someday but that costume is a bit more difficult to find. I would actually have to make that myself, most likely…or commission someone far more talented than I.

Another thing I love about dressing up as Ahsoka is connecting with other Clone Wars and Rebels fans and having young girls be excited to see me. At this convention, my best friend dressed as Princess Anna of Arendelle, so we were a double-whammy of awesome. I had a few children, both young boys and girls, and adults like my outfit, but my favorite was this little girl who was in awe of us together and her parents told us (she, like myself as a wee lass her age, was quite shy) that we were her two favorite characters. We bumped into them a few times after our initial encounter; the second time, they asked to take a picture. The little girl- who had her own little Batgirl cosplay going on- kept smiling at us, and the parents felt bad for “bugging” us but we honestly loved it, it was just so sweet. 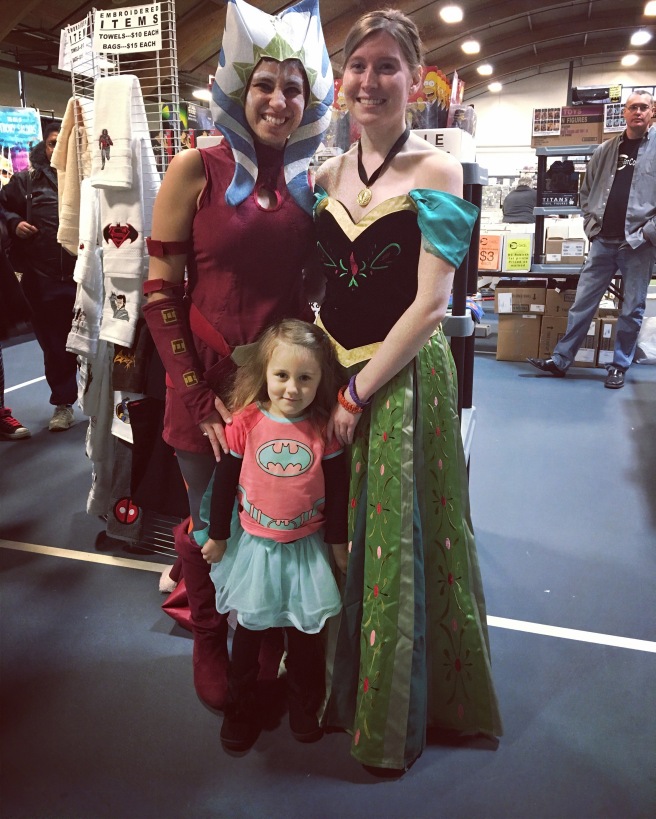 In between impressing the children, I wandered off while Princess Anna was kicking ass during a Smash Brothers tournament looking at Star Wars toys. I always look at Star Wars toys in case they have something of Ahsoka. Here I am, looking at some stupid Boba Fett action figure when the seller approaches me and asks “Did you see the Ahsoka figure?”. It was literally right in front of me and I missed it somehow when I actually looking for it. I gasped. I said something about how I was tempted because I never see that action figure anywhere (at least at a reasonable price, which this one was), and he conceded its’ rarity. He then told me he would give it to me for $25 instead of $30 because I seemed to be a fan. How magical is that?! I’m dressed up as Ahsoka and I finally find the Elite Series action figure for a good price!! 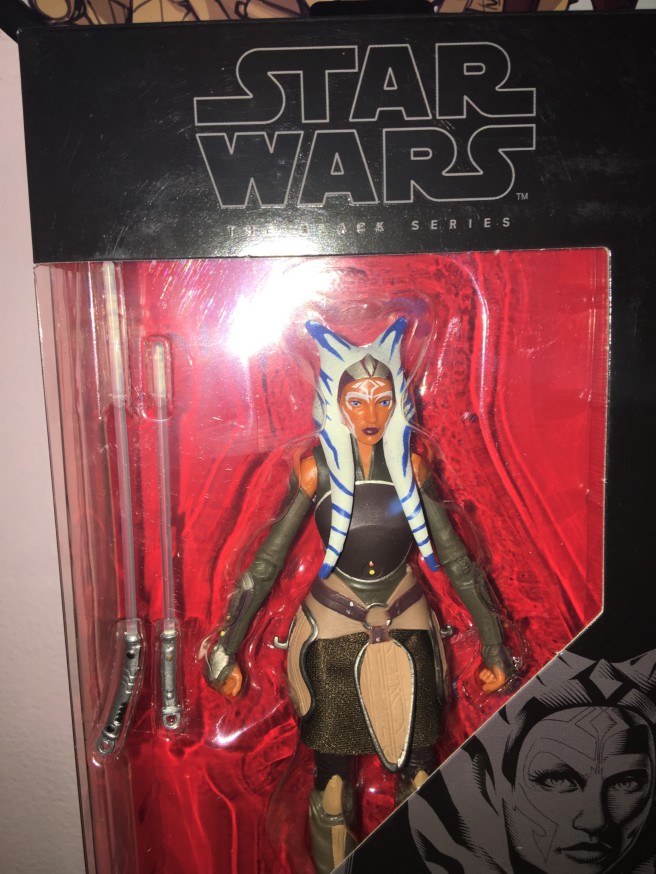 Due to my intense love of Toy Story, she did not stay in that box for long. Also, I don’t know what that blue glare on her chest near her lekku is about; there’s no blue spot on her now. Now she is roaming free, protecting my dresser with her lightsabers:

I have justified this purchase because it was a magical moment and I collect everything Ahsoka. There, that’s my excuse. Now, I still want that Wal Mart exclusive Elite (I know the ad says “black” but it’s wrong) Series figure of her in her Clone Wars days:

Like, just in case anyone who loves me is reading…I would really love to have that Ahsoka figure ;-).

But guys…now that I have one Elite Series action figure, can I stop? Can I only have 2?! I suddenly want Jyn Erso and Rey as well…perhaps also Cassian Andor and Luke Skywalker, if one exists with him in his all-black Return of the Jedi outfit (obviously his sexiest outfit). Do I need them? No, but…I just really like them. I know most adult collectors typically keep them in the box, but I like being able to touch them and make them move. After all, they are action figures, aren’t they?! Also, I can hand them down to my children one day, if I ever have them. And they better play with them. But with care! But like, with liberty; I can’t be like the dad in The Lego Movie.

But really…I can’t buy anything for myself anymore. I’m cutting myself off! I already let myself indulge in a lot of retail therapy in result of this past presidential election (yes, my heart is still broken). In fact, one of those impulsive purchases that seeped from my melancholy was this beautiful Nightmare Before Christmas print and Tsum Tsum set by Spooksieboo (which is also where I got my bloody FN-2187 print that is on my wall). First, look at how she packaged them to me; it’s like a I got a little Halloween treat! And who else do you know sells their art with adorable little Tsum Tsums to match?! This artist is awesome and adorable. 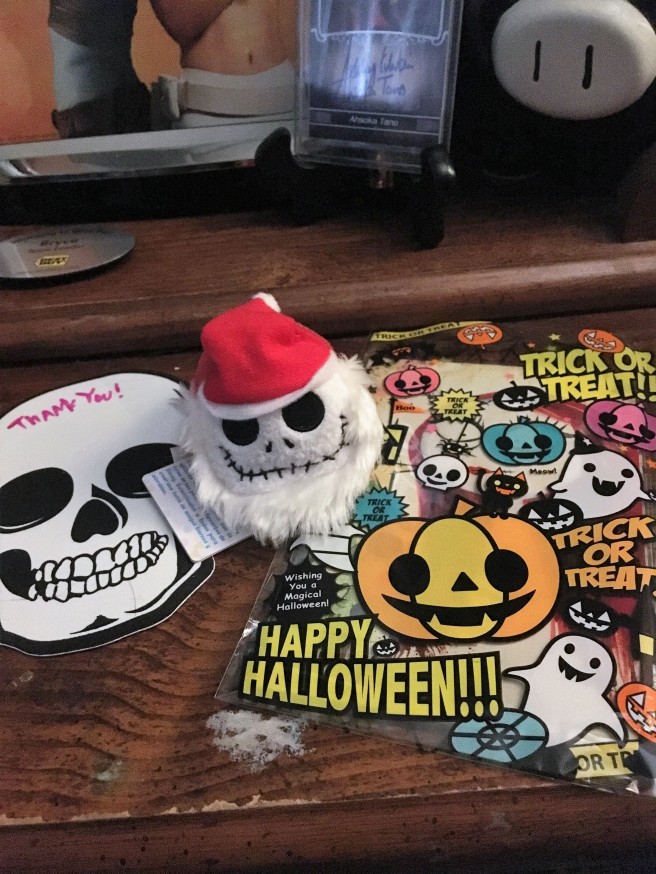 The two prints are now officially the first Christmas decorations I have up, while I’m still working on where to put the perfect little Santa Jack Tsum Tsum. I love Santa Jack. 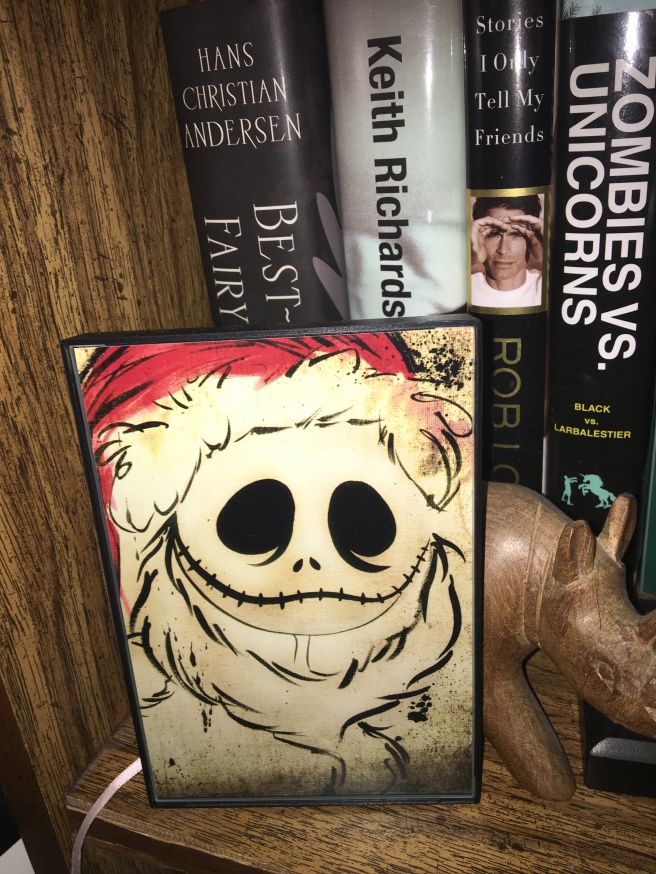 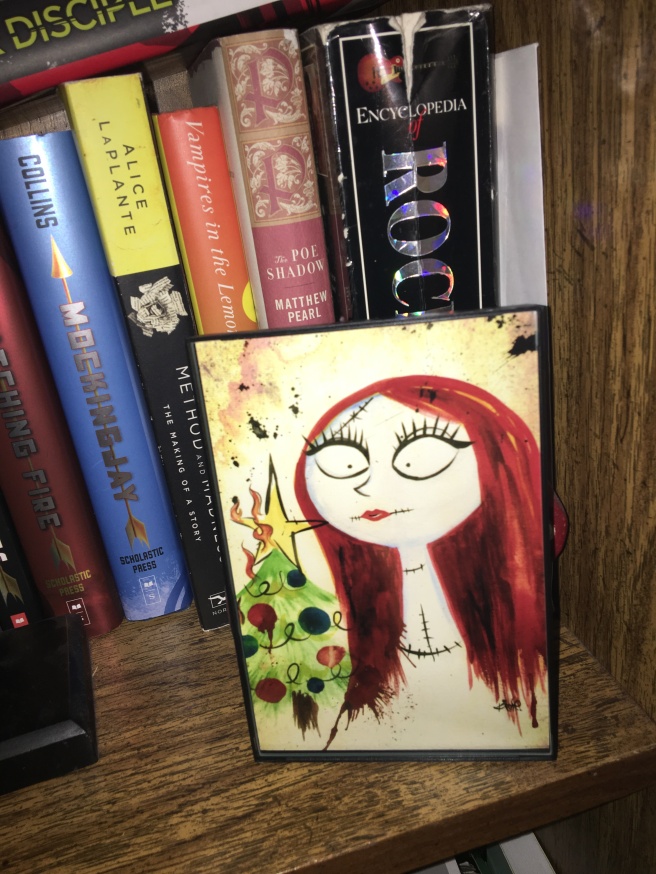 My favorite is the Sally with the Christmas tree!

I’m sorry to disappoint you, but…this bundle is totally gone. But, check out her other artwork, it’s all super cute, mostly zombies and Dia De Los Muertos style! And a lot of Nightmare Before Christmas stuff!! 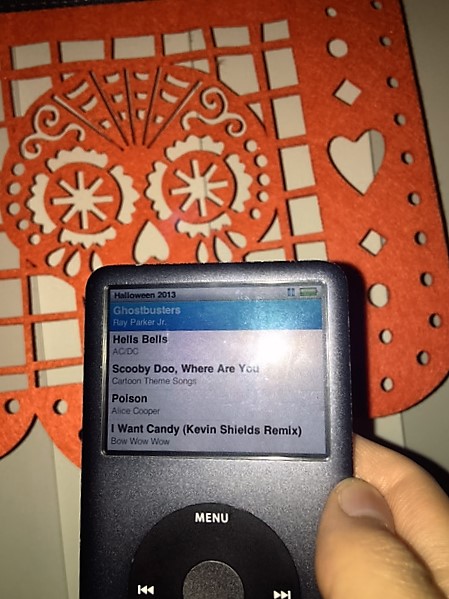