So, I broke my own rule…regarding Funko Pop! Vinyl figures, that is. I had previously established that I was only going to let myself buy Star Wars Pop! figures in an effort to control my spending and not go crazy…I would be surrounded by all of the Disney characters and other movie characters they have, such as Breakfast Club, Sixteen Candles, Clueless, and TV show characters like Sam and Dean Winchester from Supernatural. Honestly, it’s probably a smaller list to figure out what characters they haven’t funkofied! Alas, I just couldn’t resist her…

Yup, that’s Jaylah from Star Trek Beyond! I’ve talked briefly before about how much I love this new character and how badass and awesome she is. She was on sale on Hot Topic’s website and I needed other things (yes, Boba Fett car coasters and R2-D2 umbrellas are ESSENTIAL) and I had a code for free shipping so I YOLO’d that moment. Only problem is…do I keep her alone or put her with my Star Wars collection? Because, it wouldn’t be absolutely terrible to mix the franchises; it would be a peace offering of sorts, even. But also, I like her on my dresser and close to my bed, as if she’s my own personal little guardian. But I just feel bad making her look like a loner  when she has to look at these guys across the room: 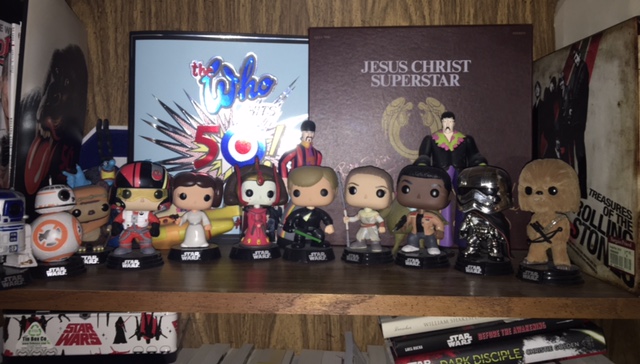 Perhaps I should just start a Star Trek collection to join my little Jaylah…actually, the thought of that is making my nerdy little heart smile. That would be pretty adorable…but at some point I would want them all together, because that would be even more adorable and piss off the haters that say you can only choose one!

Alas, I don’t know if I want to do that right now. I could at least get Jaylah another buddy; I really want the Beyond Uhura, she looks so fabulous, and of course Uhura is another strong female character that I adore:

But I’m most excited, naturally, for when this is finally in my possession:

Then my favorite alien lady role models can be together!!
OH, and speaking of nerd things, I saw Suicide Squad Thursday night!! It’s no Captain America: Civil War, but it’s still pretty good and enjoyable. And it has a phenomenal soundtrack, like all but maybe 3 songs were taken from my iPod! Definitely worth seeing if you’ve enjoyed anything Batman growing up or just superhero stories in general. I know, they’re not superheroes…they’re super villians!! But also that fresh take is exciting. My favorite villain story will also be Megamind, though. Also, I got this free poster at the theater I went to: