Happy Duran Duran Appreciation Day!! I’ve been in an emotional rut lately but my #1 darlings are always here to make me feel better. On this day last year, I highlighted my favorite songs of theirs that I felt were lesser-known by the (severely deprived) non-Duranie general public. This year, I want to share the songs that bring me comfort, that soothe me when the plane of life is having some turbulence.

But first…let’s appreciate their beauty for a moment, because this also comforts me:

At first, I was in love with Simon Le Bon (the singer, for you noobs out there): 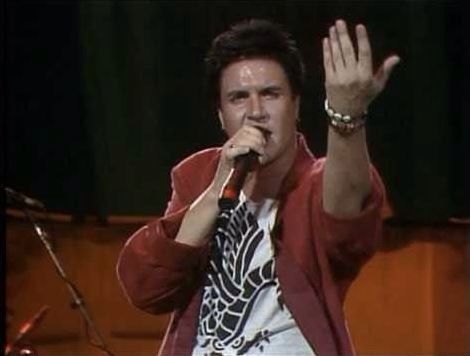 But it didn’t take long for me to fall harder for the bassist, John Taylor: 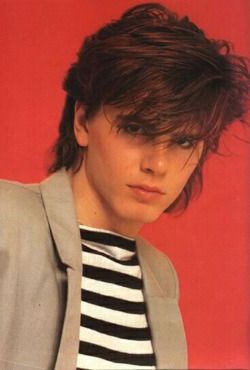 And they’ve always been extra beautiful together: 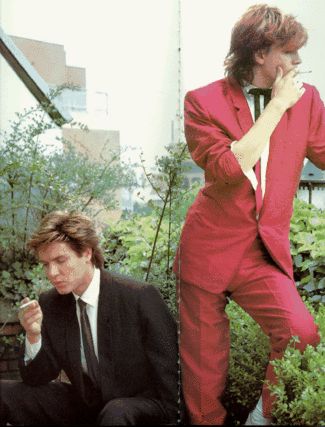 Okay…back to the music! Obviously that’s the most important thing.

In no particular order, here the Duran Duran songs that comfort me when I need it:

What Happens Tomorrow- when I was a teenager, it felt like the opening lyrics were meant for me; “child, don’t you worry. It’s enough you’re growing up in such a hurry. Brings you down, the news they sell ya, to put in your mind good old mandkind is a failure”.  Now, I cling on to “you’ve got to believe it’ll be alright in the end, you’ve got to believe it’ll be alright again”.

Come Undone- you can feel the 90’s seeping out of this one but I love it. But anyway…”now we’ll try to stay blind to the hope and fear outside. Hey child, stay wilder than the wind and blow me in to cry…who do you need? Who do you love? When you’ve come undone”. Also, there’s moment in this music video where John Taylor mouths the lyrics “hey child” and I always felt like he was speaking to me. Alas, I’ve been hopelessly in love with him since I was 13…it’s not my fault.

Box Full of Honey- this wasn’t a major single, just a track off of Red Carpet Massacre that I love. And this is more just light and pleasant rather than touching on troubles in life, so it comforts me in that way. It feels feathery in it’s acoustic tone. Also I just enjoy these lyrics: “what I thought a pretty tune, was howling at the moon, to keep me company this evening”.

Falling Down- also from Red Carpet Massacre but this was indeed released as a single. It even features Justin Timberlake! “Because I’m falling down, with people standing around. But before I hit the ground, is there time, could I find, someone to help me?” I relate too strongly to this right now. But anyway, it’s a gorgeous song.

Leave a Light On- from the album after Red Carpet Massacre, All You Need is Now. It’s just so mellow and relaxing. “I know, I swear, If you leave a light on for me, I’ll come back,”.

Lonely In Your Nightmare- we’re going way back here to their second album, my favorite, Rio. Not a massive hit (at least here in the US), but that entire album is perfection, so in my eyes it is. “Because you’re lonely in your nightmare let me in. Because there’s heat beneath your winter, let me in”

Ordinary World- I almost forgot one of their most beautiful songs! Back to the 90’s on this one. “No, I won’t cry for yesterday; there’s an ordinary world somehow I’ll have to find. And as I try to make my way through the ordinary world, I will learn to survive.”

Well there you have it, folks; those are my top 7 comforting Duran Duran songs (in no particular order). I would love to hear what your Duran Duran comfort songs are, please comment (this goes for everyone, from fellow hardcore Duranies to casual listeners)!

But wait…. because it’s Duran Duran Appreciation Day, I also have to share my all time favorite song of theirs in general as well (disclaimer: the band is not in the music video, it’s kinda devastating. But just close your eyes and listen!): 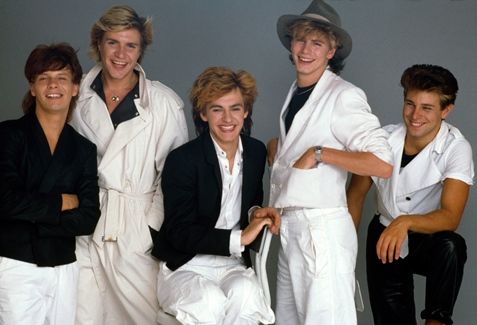 It’s August 10th, which to me and all of the other Duranies out there means that it’s Duran Duran Appreciation Day!! Those babes have been my #1 favorite band ever since I was 12, which I just talked about recently; my love of them sprouted from realizing how much I loved everything from the 1980’s (minus the politics) and delved deep into an obsession with the decade. But my love for Duran Duran isn’t just for their classic, iconic 80’s albums; they have had so many fantastic albums since then.

Just because I know you’re curious, I’ll take you back to the day  I fell in love with them:

It was a summer day, and I was at my grandparents’ house while my aunt Adelaida and my uncle John taught me a little bit about the massive benefit concert that was Live Aid. On July 13th, 1985, literally every good musician you can think of (pretty much everyone I love that was alive at the time) was either at JFK Stadium or Wembley Stadium that day, performing to benefit the starving and suffering people of Ethiopia. It was organized by Bob Geldof of the Boomtown Rats, an Irish punk rocker who is one of my personal heroes. Anyway, back to my #1 darlings; my family had some of the concert recorded on VHS tapes and I believe my uncle John was trying to show me Robert Plant on there. Somewhere in the fast-forwarding process, Duran Duran was introduced, and I thought to myself “oh, they did Rio and Hungry like the Wolf, I bet they play those songs!”. They didn’t play those songs. They didn’t play anything I knew but I fell in love with every song they did play…not to mention, they were such handsome, beautiful men (minus Andy Taylor…gross). I was hooked. I asked for their greatest hits compilation CD that summer for my birthday, entitled simply “Greatest”, and my Duran Duran-loving aunt Adelaida bought it for me. I become further obsessed and bought a DVD set of the same name that had most of their music videos on there. It was the beginning of a beautiful obsession that will never end for me.

Please look at this picture of Simon Le Bon at Live Aid and swoon with me: Naturally I was in love with Simon the most when I first got into the band, but soon enough I moved on and found John Taylor to be my favorite. I still love Simon, but my goodness, just look at this sexy bass player: John Taylor and drummer Roger Taylor (no, none of the Taylors are related, so don’t embarrass me) are cute together as well: Okay, fine, here’s all of them together (including some with the guitarist, Andy Taylor, who I am bitter towards because he quit the band literally 2 days before I saw them in concert several years ago…and later he penned an autobiography and was all like “my guitar playing made the band”….yeah, okay.) Okay, enough of their beauty for now…if you know their biggest hits, great. But, as a huge and adoring fan of this phenomenal band, I strongly encourage you to give some of their other stuff a chance.

Here are my top 5 songs you should know to truly appreciate Duran Duran on this wonderful Duran Duran Appreciation Day:

5. All You Need is Now, from the album titled the same. It’s from three albums ago, I believe.

4. The Man Who Stole a Leopard, also from All You Need is Now.

3. Ordinary World, from the Wedding album (which, like the White Album, is technically a self-titled album but is referred to as otherwise because of the cover). Come Undone is my other favorite from that album that you should check out as well.

2. Friends of Mine, from their self-titled debut album. Yes, finally taking it back; I had to show you that they were more just than an 80’s band first. But back to the 80’s. I’m so in love with this song. So strange and fun.

But Rio…seriously, it’s amazing. Also, when I was looking to buy my first car, I was with my parents walking around  a large auto mall when I saw a beautiful, tiny red car and thought it looked perfect, just what I needed. Then we got closer and I saw that it was called Rio…I knew then it was meant to be. Also, that happened two years just a few days before Duran Duran Appreciation Day, so clearly that sealed it.

Also, look at my main men just this past year with my favorite droids: 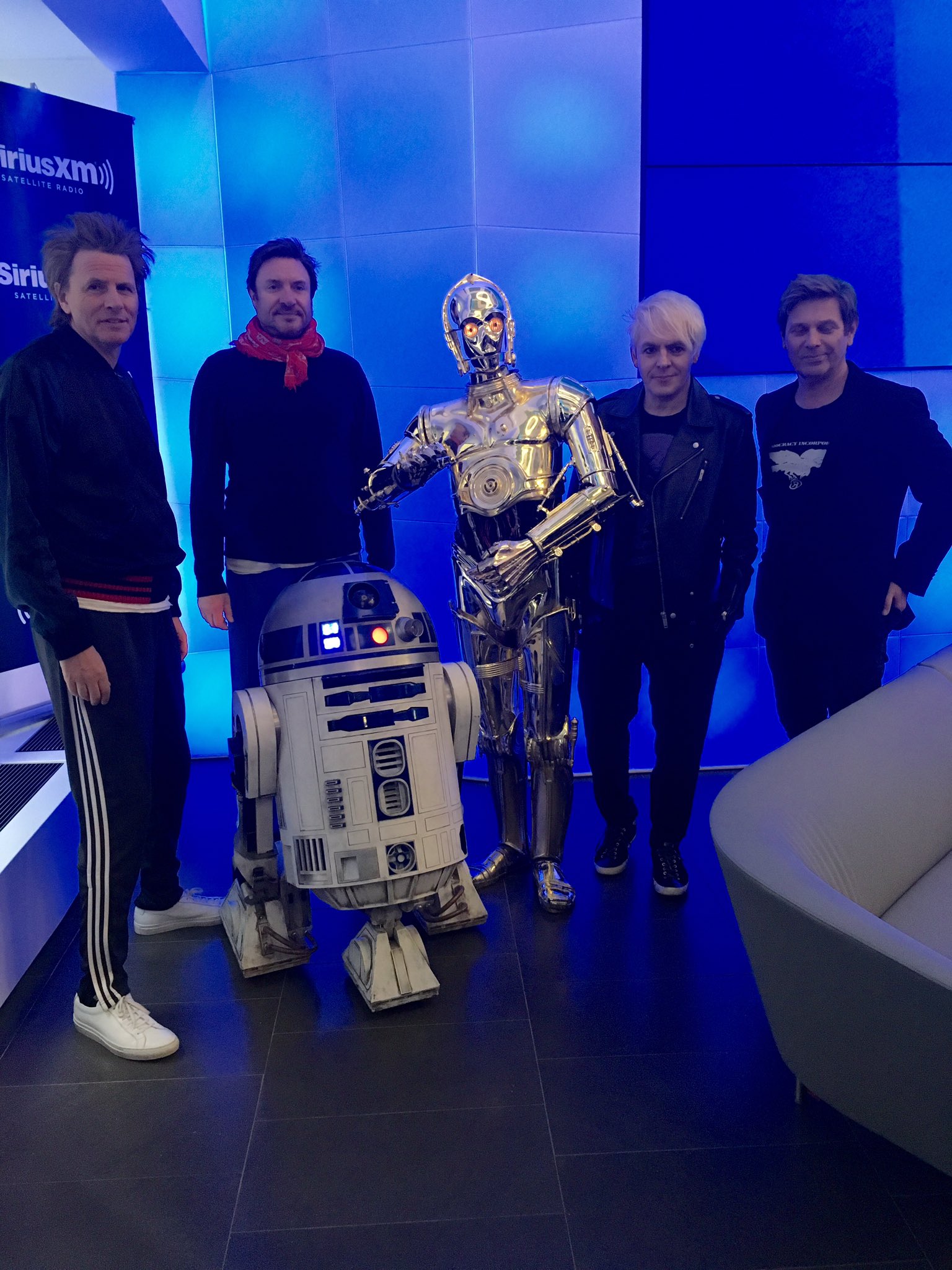 Happy Duran Duran Appreciation Day!! I actually have today off so you know I’ll be enjoying their music videos and concerts I have on DVD all day long!! My favorite is Sing Blue Silver, which documents their tour from 1984 (I think?). It’s my favorite and probably one of my last finds at Tower Records…ah, Tower Records. It was the perfect music store. May it rock in peace.