I wish I could taken home this beautiful poster depicting some of my favorite lyrics from one of my absolute favorite songs from one of my most beloved favorite bands. I was finally able to see my darling Rolling Stones’ exhibit in Chicago, “Exhitbitionism”, just a day before my birthday and during its’ final month here. It has been here since April, but I have been wanting to go since it was in London last year; I’ve already lamented about not being able to attend then. Alas, I was so excited to finally stand among the giant tongues and see what the exhibit had to offer! It’s now gone, it was only here April through July, and I had been asking people and aching to go see it pretty much every weekend, so finally my boyfriend went with me the day before my birthday as part of my birthday celebration/present (even though turning 25 hardly felt like something worth celebrating). He even paid for this extra feature where we walked around with a mp3 player that had members of the band read the exhibit’s content along with extra tidbits of interviews.

I didn’t take too many pictures inside the actual exhibit, because some things were behind glass which gave a bad glare in photos or I feared getting too close and getting kicked out. Like, when I saw the guitar that Keith Richards recorded Gimme Shelter on, one of the best songs this world has ever known, I got chills and I almost cried. But there was so much glare. But anyway, here are the pictures I did take: 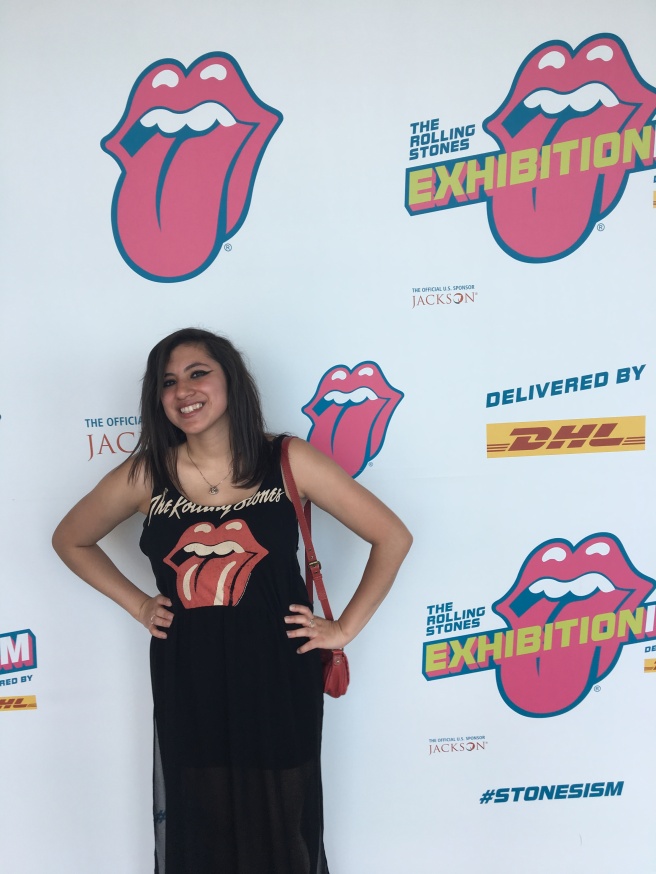 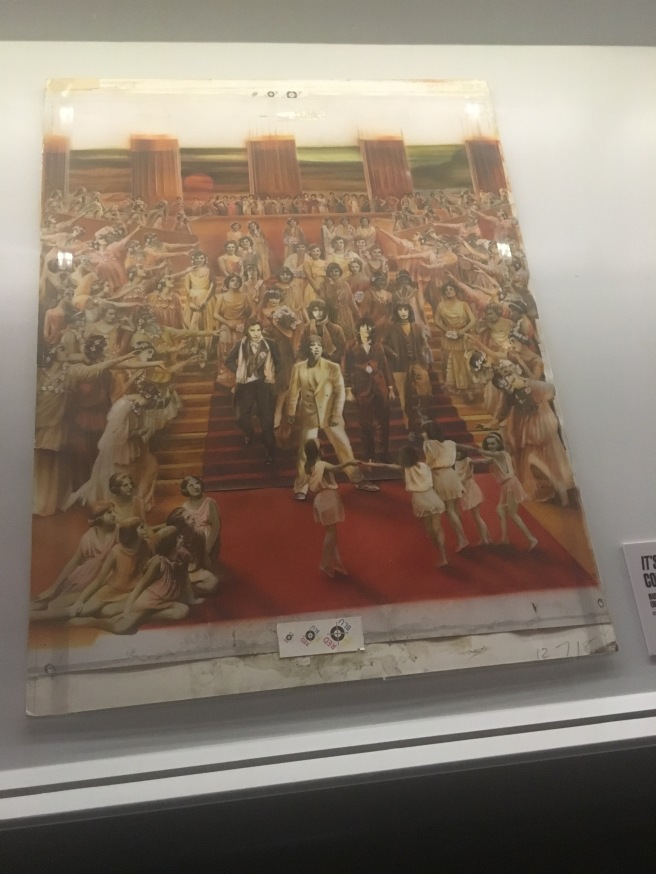 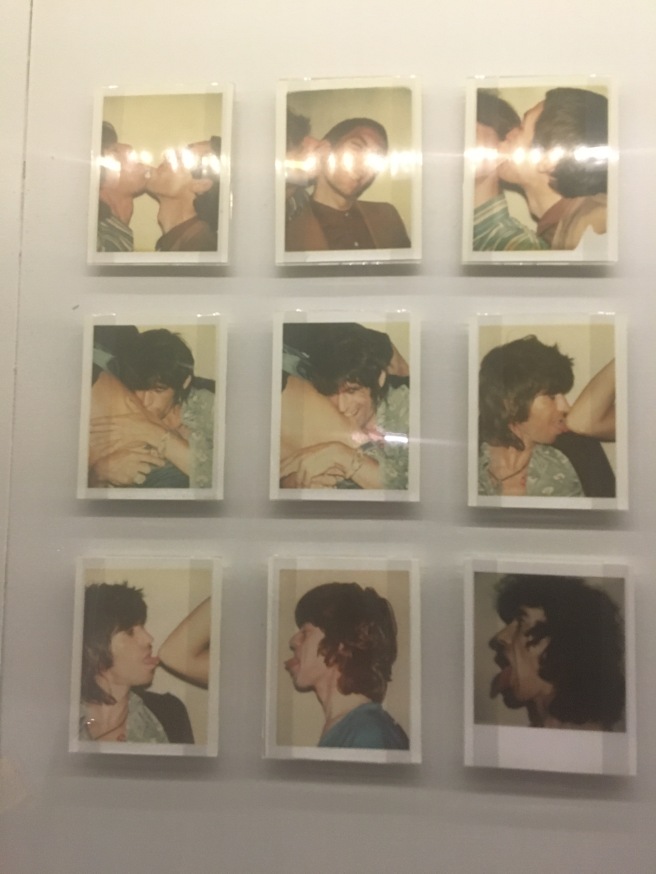 Everyone is licking each other and I love it. 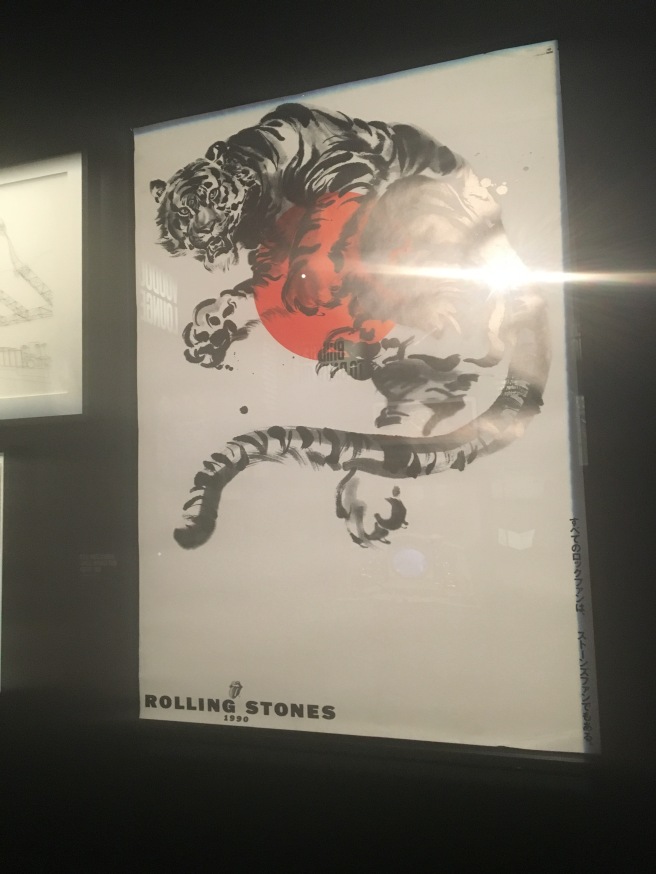 I so badly want this tiger poster for my own. 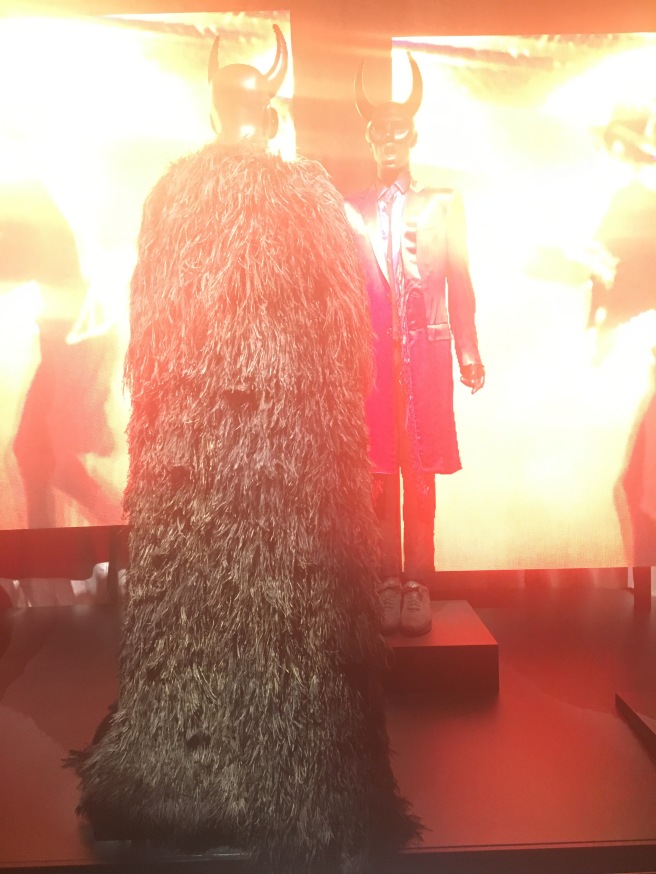 Now this black coat…this coat is special to me. I almost cried in its’ presence, and I so badly wanted to touch it, but there was an exhibit worker standing right behind me. It means so much to me because back in 2013 when I saw them live for the first (and so far only) time, Mick Jagger came out wearing this coat during Sympathy for the Devil, which over my older years has become one of my favorites. And I was already in love with Mick Jagger, but it was seriously one of the coolest things I’ve ever seen in my life; watching him majestically walk the stage, the coat blowing behind him, the words coming out of him like hypnotic lava. 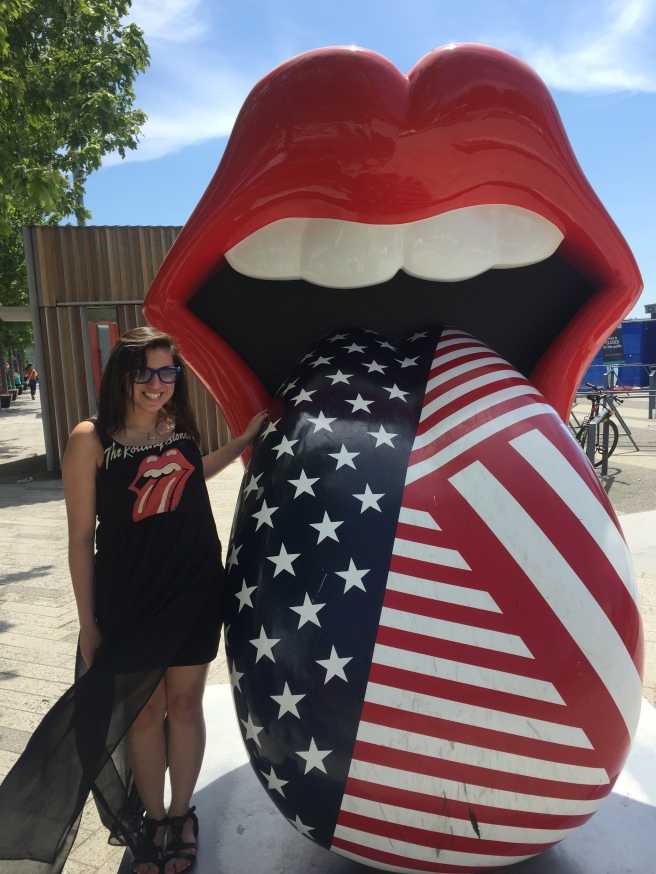 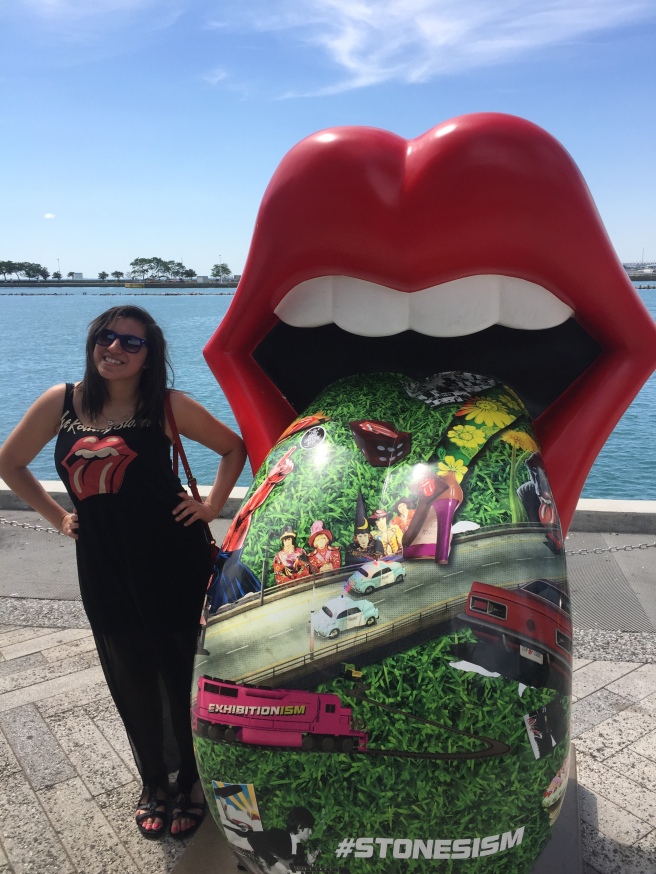 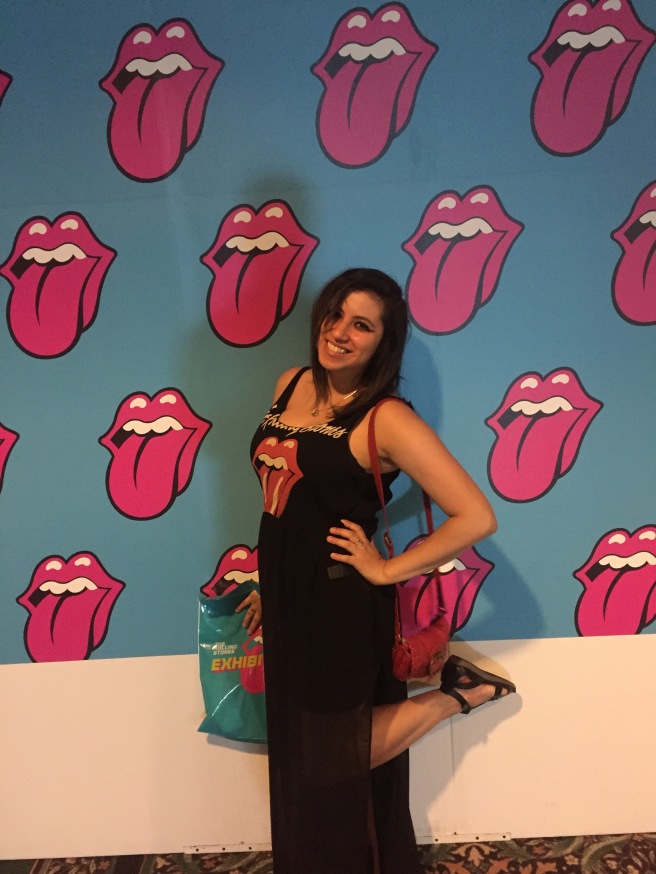 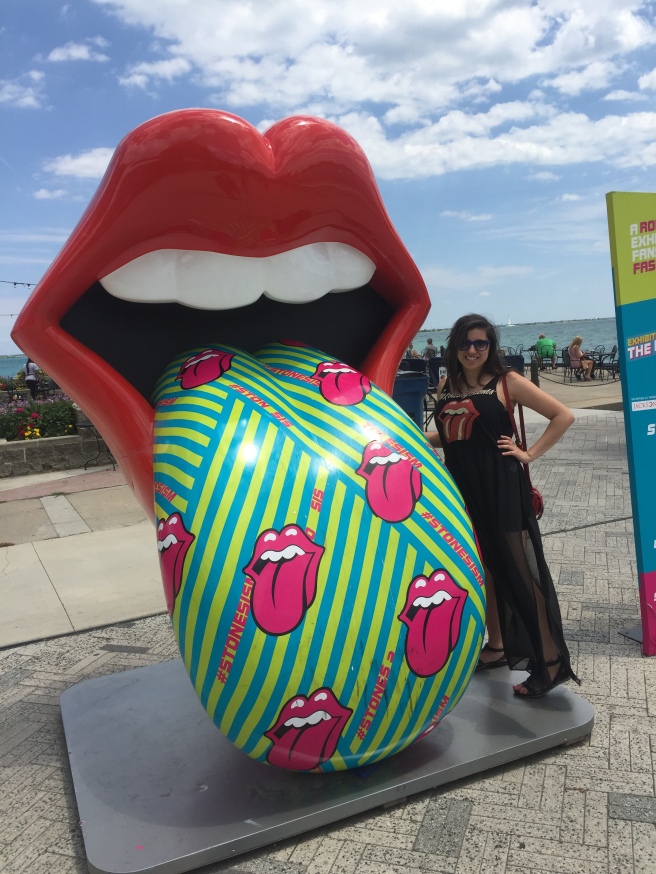 I was also excited to finally wear this dress I had ordered from Forever21 maybe two or three years ago; I had been waiting for the perfect occasion and it had at last arrived. And the dress itself is actually just a Stones tank cut up with a mesh skirt, so I had to wear a black mini skirt underneath it. I like that it came that way, though; it forced me to make it my own. Maybe some girls would rock it with leggings, or another lightweight maxi skirt. I just wish there were more rock and roll dresses like this or any rock and roll dresses at all. I have Star Wars and Disney dresses, but I would only be complete with rock and roll dresses; yellow submarines, Who targets, more Rolling Stones mouths, just give me anything rock and roll!! But anyway, this is what the dress looks like on the hanger: 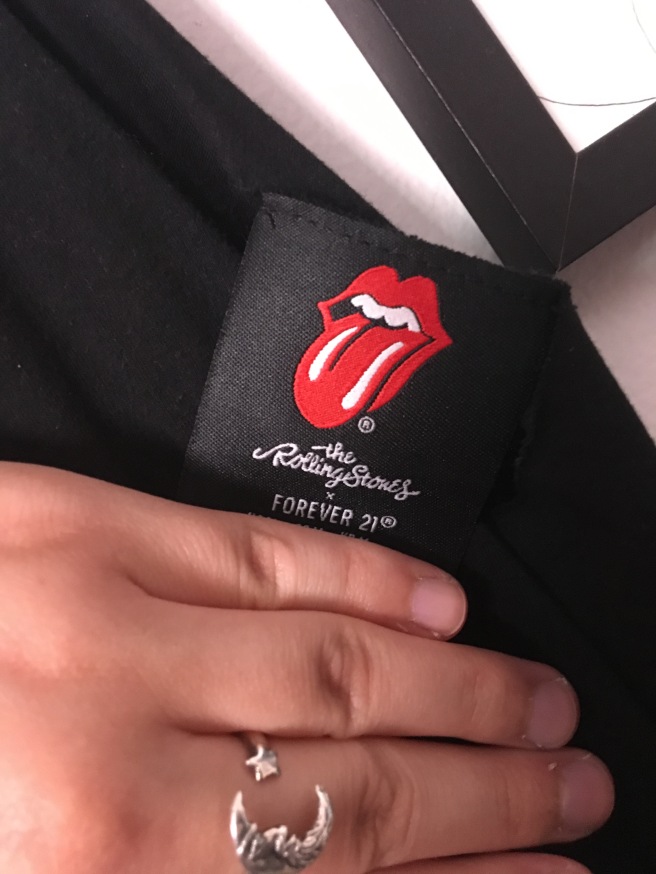 It’s no secret that I’m obsessed with the Rolling Stones logo and try to acquire as much merchandise as I can with it on there; the comforter and pillows on my bed, patches, necklaces, and of course dozens of t-shirts. The gift shop at the end of the exhibit had such beautiful and unique apparel, including various jean and leather jackets by Tommy Hilfiger that were quite expensive. I’ll have you some day, Rolling Stones leather jacket…but for now, I simply added to my t-shirt collection: 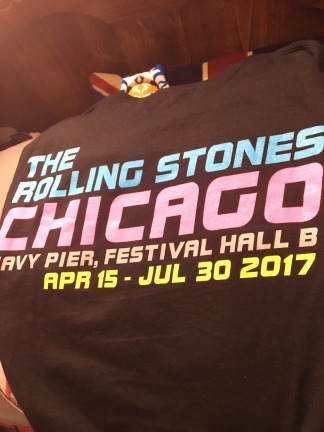 Overall, I adored the experience and I loved finally taking pictures with the statues, but that doesn’t mean I will settle for that; I NEED THOSE IN MY HOME SOMEDAY!

But thank you, my darling Rolling Stones, for giving me all of this music and art. I adore you all. 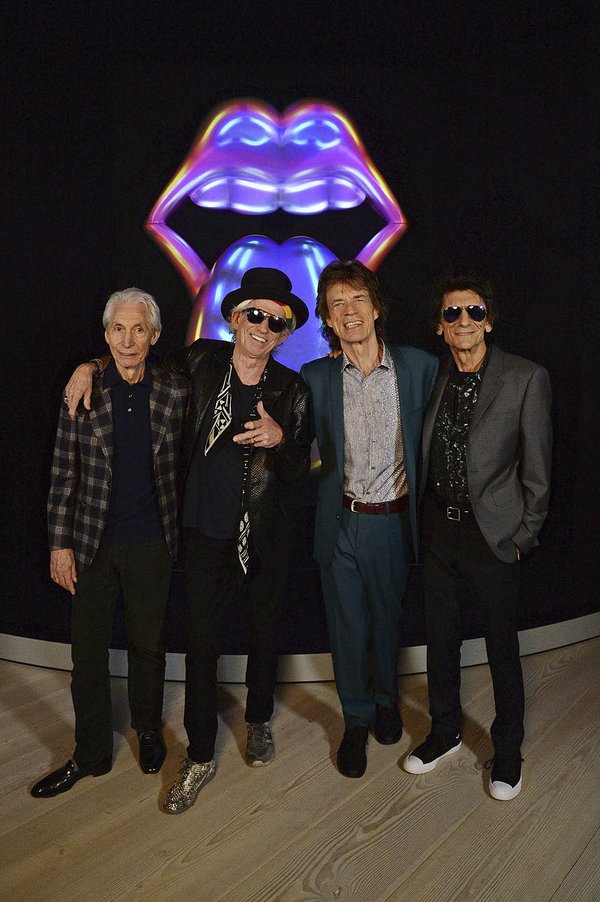